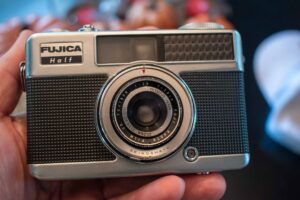 In 1967 my Dad left for a tour of duty in Vietnam.  He returned with a camera and a large set of slides.  I was 7 years old and I remember watching the slide presentation in awe.  The camera was a Fujica Half.  He picked it up while in Vietnam. Since it was a half frame, he could cram 70 or so shots into a 36 exposure roll.  This meant less film to manage.  It had a built in light meter so it was easy to use.  This gem was rugged, small and reliable.  All this made it a great choice for chronicling his 10 month tour. 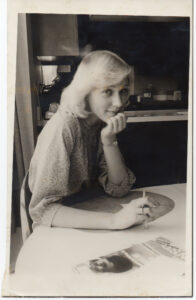 When I was in high school, he gave it to me.  This was my first 35mm camera.  I shot a lot of film through it.  It was the camera I used in my first photography and darkroom class.  Here is the only surviving print from those days.  This must have been a test print, it has a smudge and not trimmed up.  I remember being very happy with how this one turned out.  I liked the tones, the contrast and the expression.  This was taken in 1979 and is still one of my favorites.

Off to college I go and the camera is lost to mists of time.  I wouldn’t own another camera until 1985.

In October 2021, I’m on Ebay looking for used lenses for my Nikon DLSR and I stumble on to the vintage camera category.  I decided to search for this model and bang, it pops up.  For a mere $84 and a hotly contested auction, I had a fragment of my past in my hands.

I haven’t touched this model camera in over 40 years.  The feel of the textured back, its weight, the tension and sound of the film advance and the sound of the shutter all were instantly familiar.  It’s like I was using it yesterday. We’ve all experienced muscle memory, where we seamlessly perform a task that we haven’t done in years.  I think there is also sensory memory.  I was really experiencing that. It might seem odd to form a connection with a machine, but as I have talked to other camera owners, they will often talk about the small mechanical and sound details of their favorite cameras from years ago and experience the same sensory memory sensation.

So now I’m on a collector’s journey.  I dust off my old Minolta Maxxum (my next article) and start picking up vintage cameras.  I decide that I will shoot at least one roll of film in each starting with my new/old Fujica Half. 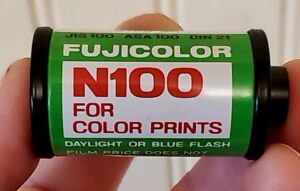 A side note, a surprising number of old cameras come with a roll of film already loaded.  These are usually partially exposed rolls.  This one had a very old roll of Fujica N100 already in it.  That film is no longer made and the developing process no longer available.  I didn’t know it was in there and it was a shock when I opened the back and saw it. I closed it quickly and  I continued to try and shoot with that roll but it film advance jammed after a few exposures. Thinking it at the end of the roll, I attempted to rewind and that was stuck as well.  I opened the back and the film had wound back on itself in the camera.  Much like a 1940s gangster grabbing a photographers camera and pulling the film out of the back, I emptied the film the ‘gangstah style’. The world will never now what was sitting in that camera for half a century. I now check newly acquired cameras for resident film.

One thing you discover about camera collecting is the shear volume of information that exists for the taking.  I’ve decided not to try and recreate any of the reference materials out there but instead offer a quick synopsis and provide a few links.  I will sprinkle in a few of my observations.

The Fujica Half was a response to market competitive pressures.  In 1963 it was launched as a direct response to another point and shoot, the Olympus PEN.  A few more were also entering the market.  They were all targeting the consumer market with an automatic  metering system, compact size and half frame film efficiency.  Yes, the half frame yields a slightly grainier print but good enough for the target market.  The lowering of the film costs won out over picture quality for some.

I loved mine then, I love it now.  Mine does have a faulty light meter.  It seems to stick and many shots of my first roll had exposure issues.  I could kind of jiggle things to make it work, going from auto mode to manual, then back.  However, I don’t trust it.  The focus, as the camera has no range finder is a challenge.

Here are samples from my first roll. I used Fuji 200 24 exposure, the ASA setting on this camera only goes to 200 and I chose not to chance it with a 400 speed film.  As I mentioned, the meter was not working reliably and I was getting used to the focus.  I started guestimating the exposures.  The prints did come back a little grainy so I pulled them into Lightroom, converted them to B&W and did some fix ups.  I’ve posted the RAW images at the end. 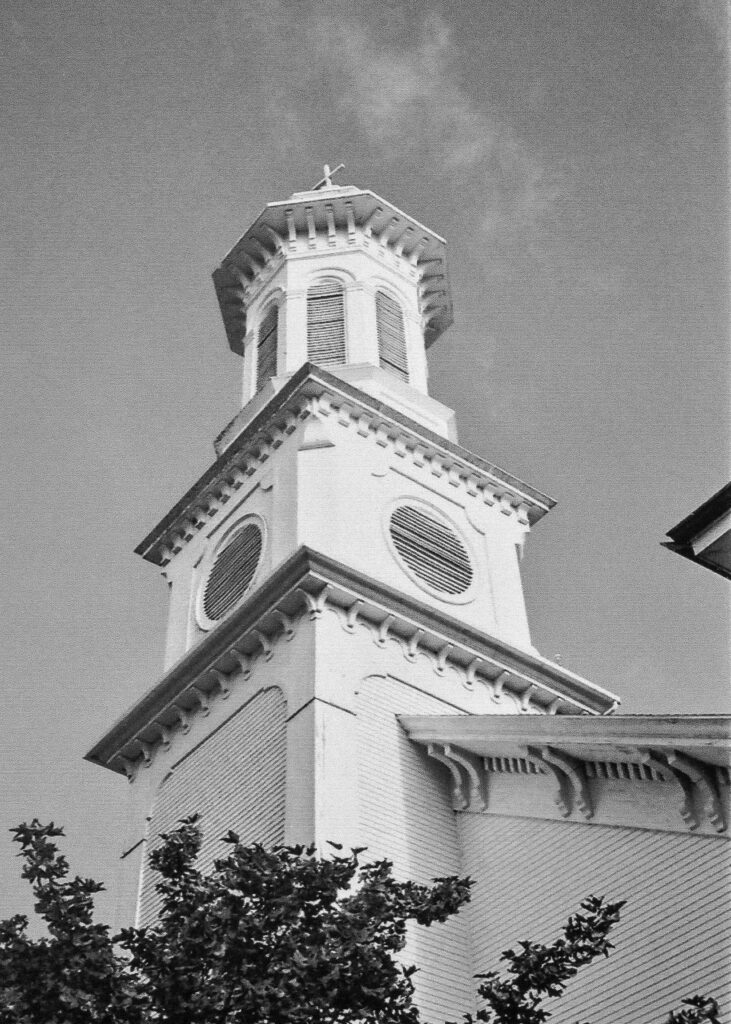 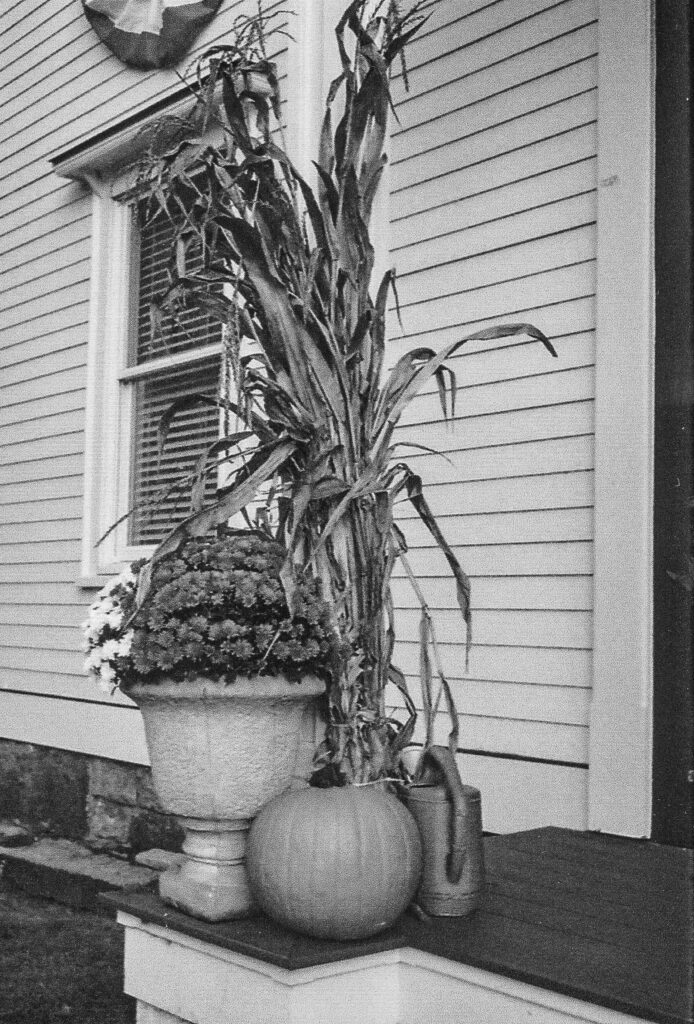 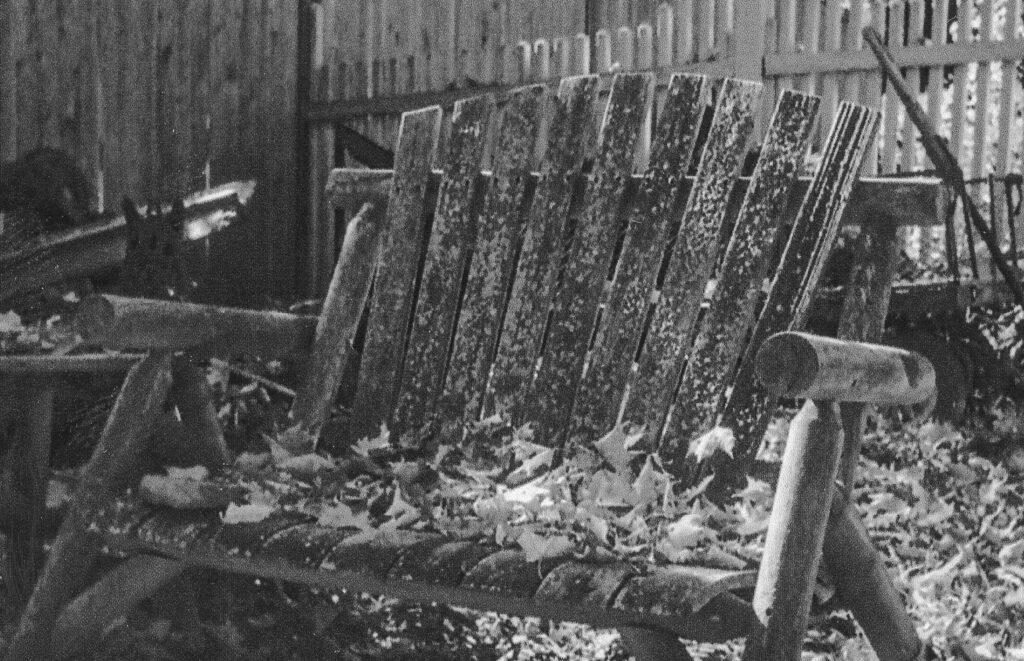 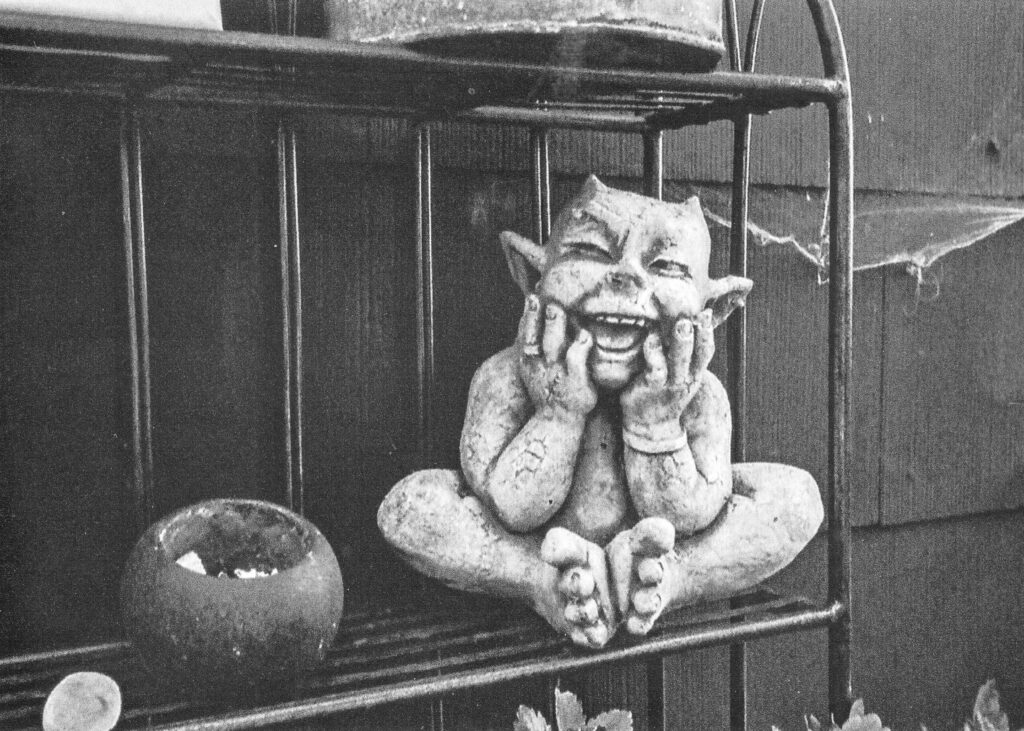 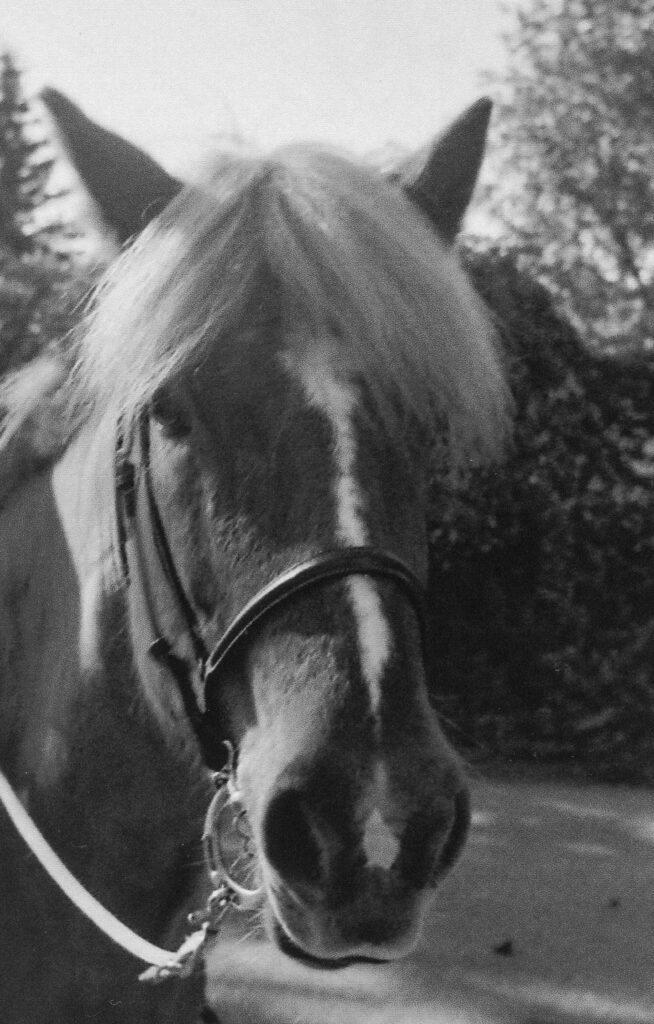 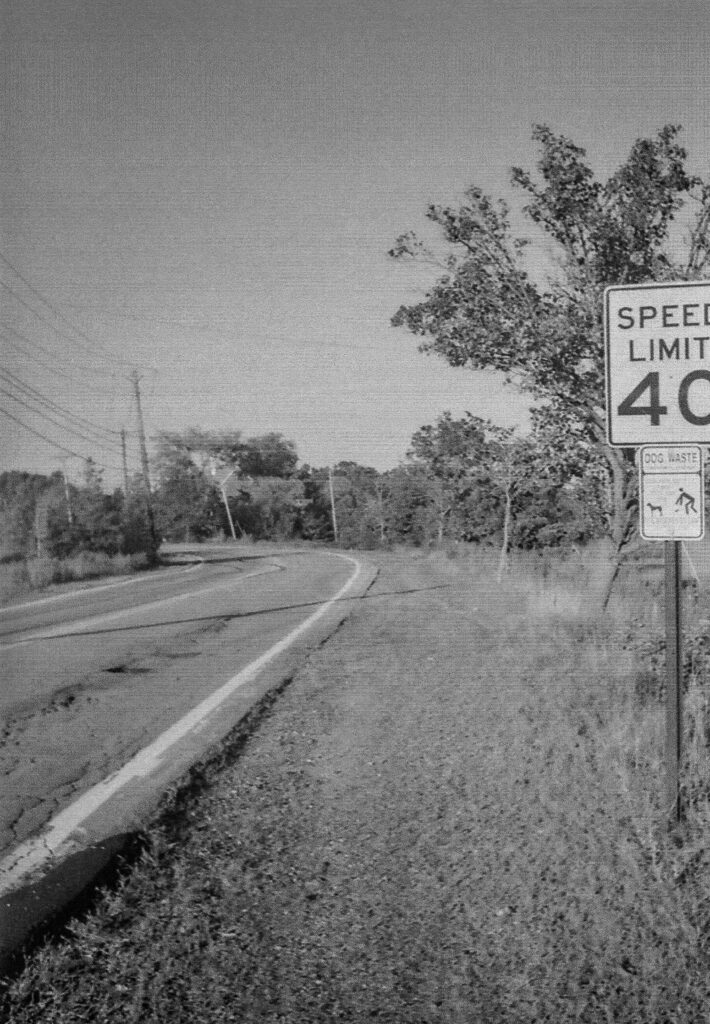 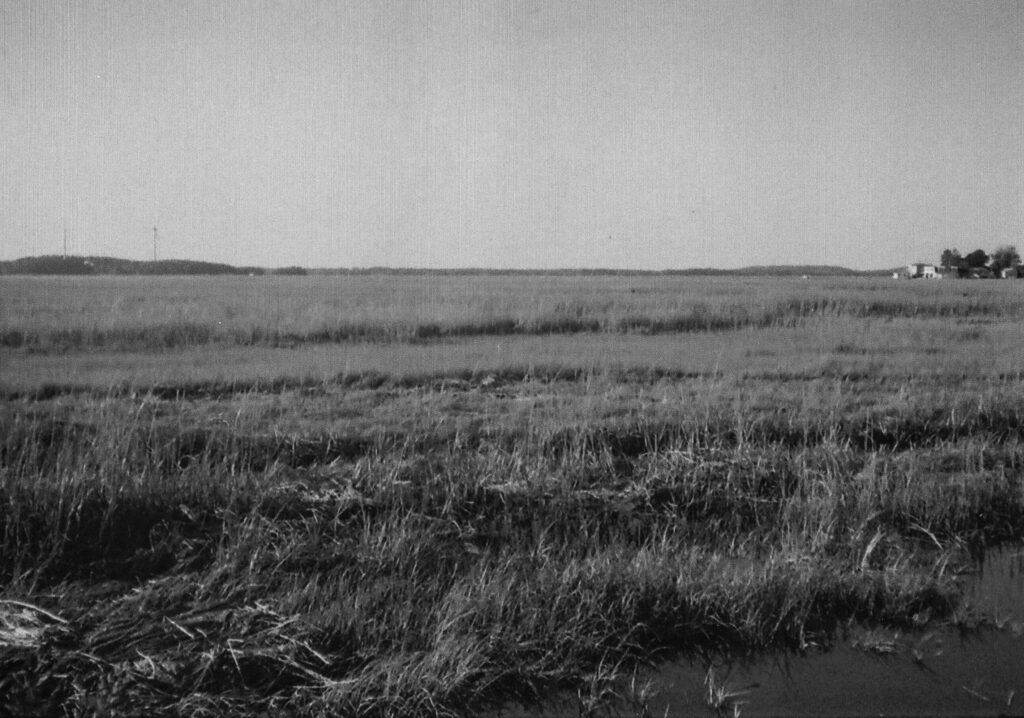 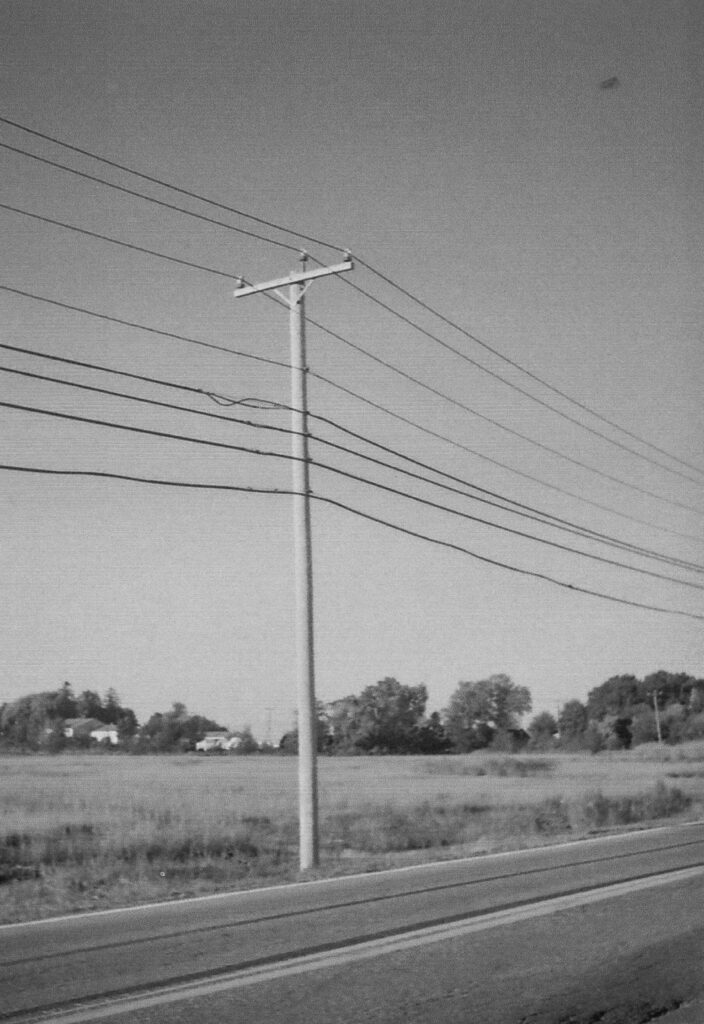 The camera is a half frame and my lab just put two frames on each print. I scanned the prints and not the negatives.